By bike ride to Paris to aid African pupils 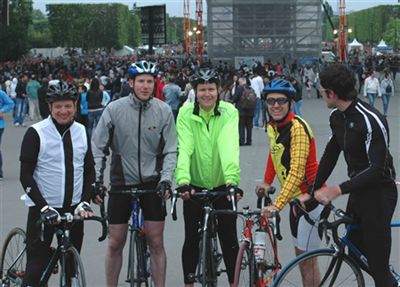 The Imaging Equipment team arrives at the Eiffel Tower.

Five cyclists from Imaging Equipment Limited set out on a charity bike ride from London on Thursday, May 26, and arrived in Paris on Saturday, May 28.

The riders, who ranged in age from 22 to 61 and in ability from competent cyclist to complete beginner, successfully reached Paris after 260 miles of pedalling, much of it into a headwind.

The team were raising money for the Jole Rider charity, which provides bicycles to poor communities in West Africa through their Bikes 4 Africa programme.  Jole Rider works with young people here in the UK to refurbish donated bikes before delivering them to schools in Gambia where they are given to children.

See this report on page 12 of the September 2010 issue of RAD Magazine.