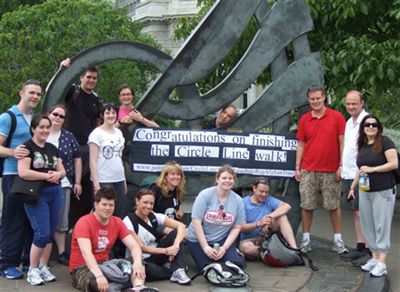 Pictured on completion of the Circle Line walk are the Barts and the London Hospital team.

While radiographers across the UK were enjoying a lie-in on Saturday, May 7th, 2011, a team of 15 radiographers from Barts and the London Hospitals were preparing, under dark, foreboding clouds, to walk the Circle Line in London.

Shoelaces were tied, muscles stretched, coffees drunk and raincoats donned  the torrential downpour had begun  and the team were ready.

Over the course of the day the sun came out and spirits rose.  Fourteen miles, 27 stations and a few pairs of sore feet later the end was in sight, with everyone looking forward to a refreshing drink and a sit down.

The challenge was completed in six and half hours and raised more than £2,400 for The Parachute Regiment Afghanistan Trust, a charity that helps parachute regiment soldiers who have served in Afghanistan and been injured.  It provides help to make adaption’s to soldiers’ homes and assists with mobility and integration into civilian life, for example by helping source employment. It also supports the families of soldiers killed in action.

The team would like to thank all those who have sponsored them and if you would like to donate please go to: http://www.justgiving.com/CircleLineWalk-ParachuteRegAfghanTrust

See this report on the back page of the June 2011 issue of RAD Magazine.