Course for ‘thinking outside of the box’ 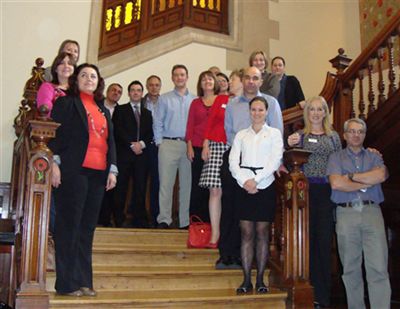 Pictured are delegates at a systems training course “Thinking outside of the box,” organised by Toshiba Medical Systems and held at the historic Pendley Manor in Hertfordshire.  The course provided systems training for customers within the North Thames and newly-established Oxbridge area.

Dr Petrie DeVilliers, consultant radiologist at UCLH provided a whistle stop tour of the ankle and shoulder in his MSK session.  Dr Trish Chudleigh, sonographer at the Rosie Maternity Hospital, part of Addenbrooke’s Hospital, Cambridge gave an informative talk on obstetric Doppler, including why and when to perform the different Doppler scans.

Mr Bill Smith, sonographer at CDS, London, made 3D ultrasound of the pelvis sound simple and left attendees wondering why more people don’t do it!

See this report on page 7 of the April 2011 issue of RAD Magazine.