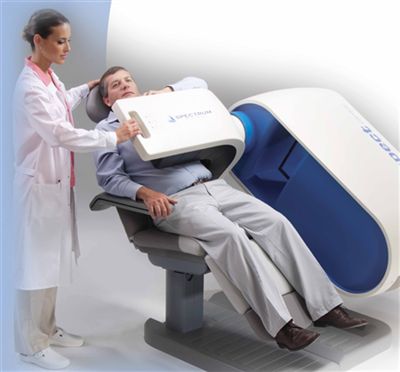 The first gamma cameras appeared on the market in the 1970s, and the design concept and performance has changed very little. Scintillation technology utilising sodium iodide crystals with photomultiplier tubes has been a common factor in all that time.

Now, Spectrum Dynamics has introduced the D-Spect cardiac gamma camera, which is based on solid state technology.

Sodium iodide and photomultipliers are replaced by solid state detectors utilising cadmium zinc telluride crystals. An array of nine detector blocks is arranged in an arc, each with integrated tungsten collimation. Detectors rotate on their axis through an angle of up to 120° to ensure the highest efficiency sampling rate for the myocardium. Each detector has 1024 individual cadmium zinc telluride crystals, making 9,216 in total.

This array is said to reduce the offset distance between detector and patient, which contributes towards the dramatic improvements in performance.