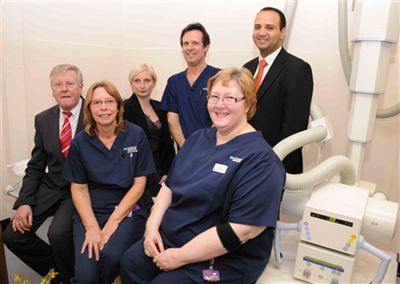 Agfa HealthCare has announced that its two-year fund-raising effort for x-ray equipment at Newquay Hospital came to fruition with the handover of a DX-Si x-ray room, incorporating the DX-S high speed computed radiography system.

Agfa’s DX-Si system is a replacement for a floor-mounted x-ray system, which was nearly 20 years old.

The x-ray room at Newquay Hospital has been completely revamped to house the new equipment in a more ergonomic layout.  The fund-raising, organised by Newquay Hospital’s League of Friends, raised £60,000 towards the project, with Cornwall and Isle of Scilly Primary Care Trust contributing £100,000.

See the full report on page 9 of the August 2010 issue of RAD Magazine.