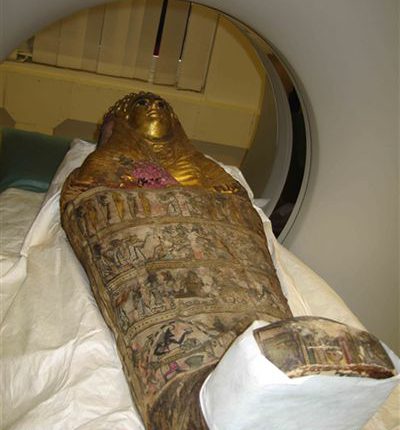 Using a Toshiba Aquilion 64-slice CT scanner at BMI The Blackheath Hospital in south east London, scientists were able to study the mummies’ skeletons and anatomy without disturbing their wrappings.

This revealed that one mummy, assumed for the last century to be a female, was in fact a boy.   Forensic scientists hope the results of the scans will help to solve the mystery of how the children died in ancient Egypt.

Janet Davey said: “We have already been stunned to discover  and amused  to discover that one of the mummies is in fact a boy.   The mummy has been at the British Museum since the late 1800s and experts believed it was a girl because of the gold drapery and decorative purple flowers the mummy was holding  so it is quite exciting to get the 3D image and discover it is a boy.”

See the full report on page 30 of the July 2009 issue of RAD Magazine.