Lecture features a walnut and a Philips scanner 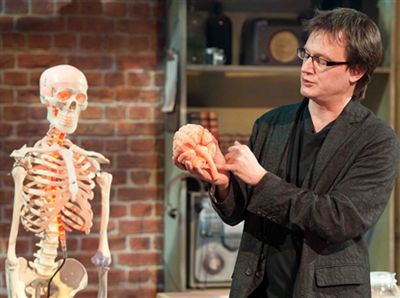 Professor Bruce Hood presented the Royal Institution’s Christmas Lecture that was screened on BBC4 and featured an outside broadcast of Dr Thalia Gjersoe using a Philips Healthcare MR imaging system.

An outside broadcast crew filmed Professor Hood’s colleague Dr Thalia Gjersoe in the scanner at the Cobalt Imaging Centre in Cheltenham.  The high resolution images demonstrated Dr Gjersoe’s brain activity and revealed to the studio audience in which hand she had been hiding a walnut.

Philips Healthcare MR business manager Annette Schmidt said: “We were thrilled to have been the highlight of such a prestigious and iconic event.  The experiment demonstrates the exceptional image quality of the Achieva 3.0T with MultiTransmit to an audience of millions.”

See the full report on page 26 of the February 2012 issue of RAD Magazine.