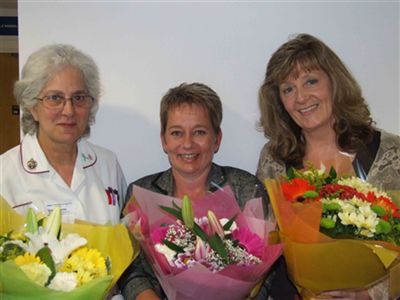 Pam St Clement, known to millions of soap fans as Pat Butcher, was the star guest at the celebration of the full digitalisation of the North London Breast Screening Service.

Together with the other attendees, she received a tour of the facilities viewing four Hologic Selenia full field digital mammography systems, two Hologic prone biopsy tables and MICAS mammography PACS, all of which were supplied and installed by MIS Healthcare.

The £2m investment has allowed these facilities to become the first fully-digital screening service in London.

Women in North London and regions of Hertfordshire can now be screened at either of two static bases, at Edgware Community Hospital and North Middlesex Hospital, or at one of five mobile units, all with Hologic Selenia FFDM installed and DIMEX image transfer system for worklist and image transfer.

Chief executive Averil Dongworth told the assembled audience: “You have certainly set the standard for other screening services around the country to follow and I know that you have a regular trail of visitors coming around the building to see what you have done and to ask you how you did it.”

Director of screening Dr Will Teh admitted he was proud of the progress they have made. For one thing, he said, of the five installed SecurView workstations “You can see immediate thumbnails of the image to check that a large enough breast area has been covered, making technical recalls owing to processing or other film problems a thing of the past and, so, reducing patient exposure to radiation while freeing up capacity.”

See the full report on page 18 of the August 2010 issue of RAD Magazine.