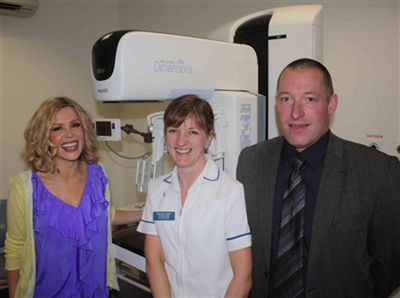 Major new improvements to the breast screening centre at the Great Western Hospital, Swindon, were officially opened in March by friend of the hospital Melinda Messenger.

The centre is the result of a £1.6m investment in breast screening services for women which also includes two mobile screening units (based in different locations in Wiltshire) and will mean more women are able to be screened, helping the early identification and treatment of breast cancer.

Facilities include a fully digital environment with Hologic Dimensions mammography units supplied by Medical Imaging Systems and the MIS PACS system, and a new stereo biopsy unit, Hologic Dimensions Affirm, that allows for faster and more accurate sampling of suspicious areas within the breast.  The breast centre is said to be the first place in Europe to introduce this new biopsy unit.

The drive behind the new centre has been to meet an increase in demand for breast screening, which has continued to grow following an expansion of the National Breast Screening Programme.