Oasis fit for a Harlequin 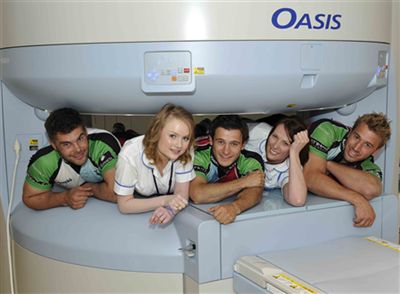 Mayday Healthcare NHS Trust officially opened its new InHealth MRI unit on 11 May by fitting three Harlequin rugby stars (and some staff members too) in its new open scanner.

The three rugby players, Nick Easter (32 caps for England), Chris Robshaw (one cap) and Danny Care (eight caps), who have been named in the England summer tour rugby squad, have all seen first hand the importance of scanners such as these.

The Hitachi Oasis 1.2 Tesla scanner is described as the first high field open scanner in the UK.  It provides a 270 degree view, allowing for a more comfortable patient experience. It is particularly suitable for patients who may be claustrophobic, bariatric, have limited mobility and for children.

See the full report on page 26 of the July 2010 issue of RAD Magazine.