Report aims to improve use of immersive technologies in healthcare education 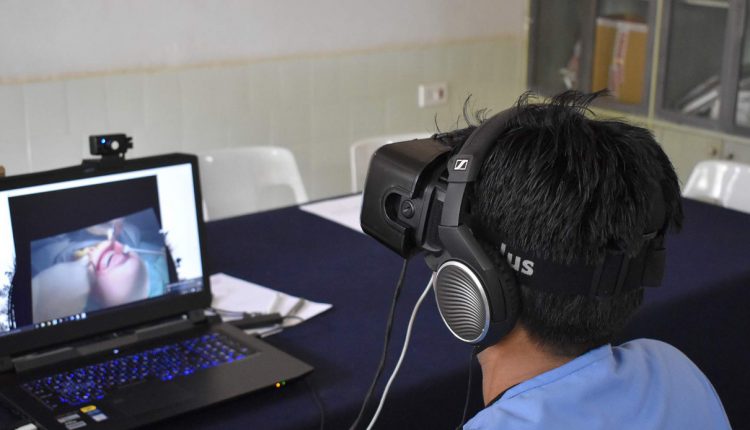 University of Huddersfield Centre for Cognition and Neuroscience director of Professor David Peebles and Huddersfield PhD graduate Matthew Pears contributed to the report. Professor Peebles said: “It is about developing a set of principles and guidelines for the use of immersive technology in medical treatment. Immersive technology is becoming increasingly popular and, as the technology is advancing, it’s becoming clear that there is great potential to make training more accessible and effective.

“It is important, however, that research is driven by the needs of the user and existing evidence rather than the technology. Rather than thinking ‘we have a new bit of VR or AR kit, what can we do with it?’ we should be looking at the problem that needs solving – what are the learning needs and how do we use technology to solve it?”

Pulijala had an interest in technology and education and in using VR for dentistry training. Pears was looking at soft skills and situation awareness, which could be applied to investigating how dentists were able to keep track of what was going on around them. The team visited seven dental schools in India in early 2017, with support from travel grants from Santander Bank, to test their VR-based training materials on students. The experience gained from that visit contributed to both researchers’ PhDs, and ultimately led to the involvement of Professor Peebles and Pears in the new report.

“Developing immersive training materials can be very time-consuming and difficult to evaluate properly. We were lucky to have surgeon Professor Ashraf Ayoub, a professor of oral and maxillofacial surgery at the University of Glasgow, grant us permission to film a surgical procedure that was then transformed into a 3D environment to train students about situation awareness while in the operating theatre,” Professor Peebles said. He hopes the work so far will provide a basis for more investigations that could help get the most from the potential that VR and immersive technology have to offer. “As the report recommends, more collaboration is required to pool technological and intellectual resources, to try to develop a set of standards and a community that works together to boost and improve research in this area,” he said.

Picture: UK academics and organisations have contributed to a report that proposes methods to improve the use of VR and AR in healthcare education.

Published on page 3 of the August 2021 issue of RAD Magazine.