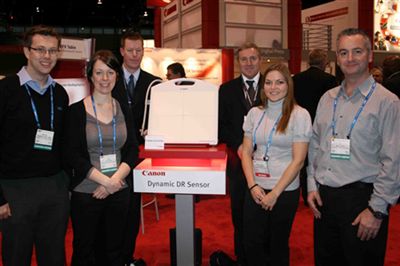 In the front row, beside a Dynamic DR Sensor from Canon, are Mark Hampshire, Ann Eaglen, Catriona Lawson and AJ Wallace from Guy’s and St Thomas’ Hospital, London.  Behind are Neil Staff and Paul Andrews of Xograph.

The 94th Annual Meeting of the Radiological Society of North America (RSNA) was held in Chicago at the end of last year.

Despite the poor exchange rate compared to last year attendance from the UK and Ireland increased slightly according to figures collected by RAD Magazine.

Whatever the attendance there was certainly plenty for attendees at the show to see with over 700 companies exhibiting their products and services in the technical exhibition, which this year spanned three large exhibition halls in Chicago’s McCormick Centre.

New to the scientific programme were a series of courses in breast, chest, gastro-intestinal, genitourinary and gastro-intestinal/emergency radiology, self-assessment modules in a variety of sub-specialty areas and categorical courses in cardiac imaging and CT and MR physics.

RSNA this year will be held in Chicago from November 29 until December 4.

A picture report of RSNA will be published in the January 2009 issue of RAD Magazine.