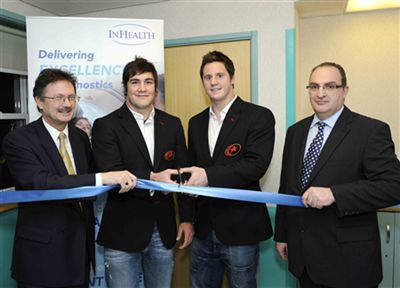 Barnet and Chase Farm Hospitals NHS Trust has officially opened its new MRI scanner with the help of two stars from the Saracens Rugby Club.

The rugby players, England International Brad Barritt and England A’ International Andy Saull, have both been scanned at the Barnet MRI centre following injuries on the field.

Brad, who has been scanned twice at the Barnet MRI centre, said it was “an honour to be invited to the opening and to meet the medical and scanning staff.”  He also noted “the expertise of the staff and the new scanning equipment is beneficial to the local community and the players.”

Andy, who cut the ribbon at the opening ceremony said: “Sports and medicine go hand in hand and it’s good that we are close to the unit so if, on game day, any of the boys get injured they can get an urgent scan and treatment.”

See the full report on page 12 of the February 2011 issue of RAD Magazine.