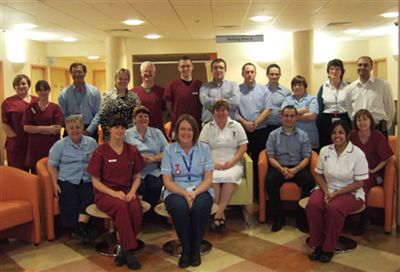 The team of staff at the Oldham site.

The Christie has opened its new radiotherapy centre in Oldham  described as the first facility of its kind in the UK.

The £17 million centre is the first in a network of radiotherapy centres, where cancer patients from Oldham and the surrounding areas will be able to access treatment closer to home.

Previously, patients across Greater Manchester could access radiotherapy only at The Christie’s main site in South Manchester.  As cancer patients receive treatment on a daily basis as an outpatient, it meant a gruelling three-hour round trip for many people for a month or longer.

The new centre will be able to treat 70 patients a day with two £1.3 million radiotherapy machines.  It is based at The Royal Oldham Hospital and will save much time for patients from Bury, Middleton, north Manchester, Oldham, Rochdale and parts of Tameside.