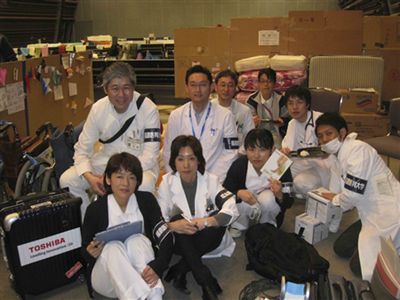 Since the devastation that hit the Tohoku region of Japan, many of those who managed to survive the disaster lost their homes and are now spending difficult days in the shelters and evaluation centres.

The constrained life in the shelters where people sit or sleep on the floor with little space can increase the risk of developing deep vein thrombosis.  Ultrasound examination of the venous of the lower extremities has proved to be an effective clinical approach in checking for DVT.  Based on lessons learned from the 2004 Chuetsu earthquake in the Niigata prefecture, pre-emptive measures are required from an early stage, such as the formation of a clinical team to visit shelters and provide medical check-ups for DVT.

Many medical programmes have been set up to protect the health of evacuees.  A team nicknamed Team Echo offering ultrasound examinations for DVT began work in April, led by Dr Shinya Takase from Fukushima Medical University.  Other members included leading ultrasound technicians in the vascular field Hiroshi Sato, Tetsuya Yamamoto and Tsuneyoshi Yakuwa, backed up by around 30 medical professionals including physicians and nurses and sonographers.

See the full report on the back page of the July 2011 issue of RAD Magazine.