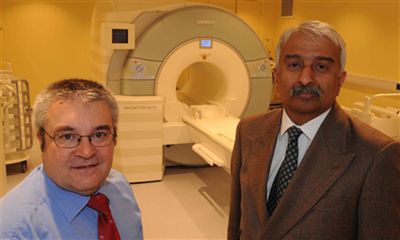 With a Magnetom Verio at the Wolfson Brain Imaging Centre are left Dr Adrian Carpenter, director of MR and reader in imaging sciences at the WBIC and Professor Krishna Chatterjee, director of the Wellcome Trust Clinical Research Facility in Cambridge.

The University of Cambridge has installed a new Siemens Magnetom Verio 3T MRI scanner in the Wolfson Brain Imaging Centre on the Addenbrookes Hospital campus.

The Magnetom Verio has a wider than conventional design (70cm) and features Tim (Total imaging matrix).  It can be used for many applications, including spectroscopy and imaging.

At WBIC will be used by a range of investigators from both the Cambridge university and from Addenbrookes – including the newly-established Institute of Metabolic Science, to undertake Magnetic Resonance Spectroscopy (MRS) in a range of disorders including insulin resistance and diabetes, obesity, endocrine and metabolic storage diseases.

MRS technology enables researchers to measure biochemical processes and pathways in tissues without the need for an invasive biopsy.  Such knowledge may lead to a better understanding of how metabolic pathways are deranged in various disorders.

“The Magnetom Verio will allow us to develop MRS as a biomarker in clinical metabolic research,” said Adrian Carpenter, director of MR and reader in imaging sciences at the WBIC.  “The system is performing well and has lived up to all our expectations.  We are positive it will assist with our research efforts.”