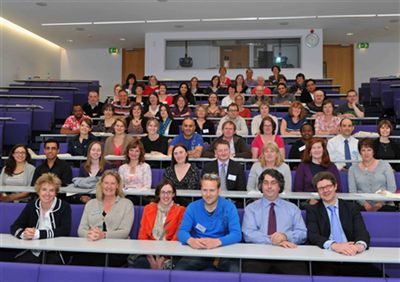 Pause for a picture at the Philips MR Users’ Group Meeting in Oxford.

Philips Healthcare had to cancel its MR user group meeting planned for January because of the extreme weather conditions at the beginning of this year.  The rescheduled meeting was held more recently at the Medical Sciences Teaching Centre in Oxford where attendees are reported to have had “an enjoyable and stimulating day.”

The programme consisted of clinical presentations together with lectures on the latest technology.   Dr Priya Narayanan, consultant radiologist at Chelsea and Westminster Hospital, opened the meeting with a talk on “Contrast enhancement in gynaecological MR,” followed by Ruth McDonnell, senior MR radiographer at Nuffield Orthopaedic Centre, Oxford presenting on “3D volume knee imaging.”

See the full report on page 30 of the July 2010 issue of RAD Magazine.

Learn about MRI in radiotherapy