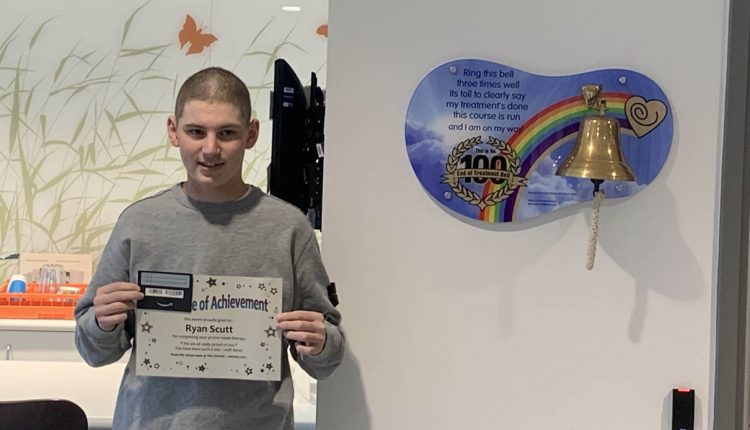 A rugby-mad teenager who was told he had cancer on his 15th birthday is celebrating the end of his proton beam therapy (PBT) after becoming the 2,000th person in the UK to benefit from the treatment.

Ryan Scutt was diagnosed with nasopharyngeal carcinoma in September last year. Nasopharyngeal cancer affects the pharynx and is thought to be associated with a virus that causes glandular fever and affects one in two million cases.

His mother Hayley explained: “When Ryan first became unwell, he was lethargic, suffering from headaches and really wanted to be left on his own. He was developing more and more symptoms, getting worse by the day, and my ‘mother’s intuition’ was telling me something wasn’t right.”

Various investigations eventually led to Ryan having a scan where the tumour was revealed occupying the nasopharynx, pressing on his pituitary gland, carotid artery and optic nerves. Two days later he and his family were told it was cancer.

A treatment plan was devised, first focusing on an intensive course of chemotherapy followed by six-and-a-half weeks of proton beam therapy. Following assessment by a national panel of experts, Ryan was accepted for treatment in Manchester and began a course of 34 daily proton treatments in December.

He was treated at the first NHS high energy PBT centre at The Christie which was part of a £250 million investment by NHS England and is now treating the vast majority of NHS patients referred for PBT. A second NHS centre will open later this year at University College London Hospitals. NHS clinical director for cancer Professor Peter Johnson said: “There have been huge advances in precision cancer treatment and proton beam therapy is just one incredible example. We are delighted that we have treated 2,000 patients, like Ryan, with thousands more to benefit from this groundbreaking treatment in the coming months and years.”

NHS clinical director for cancer Professor Peter Johnson said: “There have been huge advances in precision cancer treatment and proton beam therapy is just one incredible example. We are delighted that we have treated 2,000 patients, like Ryan, with thousands more to benefit from this groundbreaking treatment in the coming months and years.”

Hayley said: “It was very difficult being away from home for so long and splitting our family in two, as we’re very sociable and close, but we did what we had to do. Christmas away from home was very hard, but we realised that doing this would ensure Ryan would get the best treatment to make sure he would have Christmas to celebrate in future years.”

Ryan finally finished his treatment at the end of January and was delighted to ring the ‘end of treatment bell’ at The Christie to mark the occasion, before returning home to the rest of the family.

Scans have shown the tumour has responded to the treatment and Ryan is feeling much fitter and healthier. He will continue to have regular scans, and the family is hopeful the full course of treatment will completely cure him and he is now looking forward to returning to school gradually over the next few weeks. He said: “It has been a rollercoaster of emotions. I was really very poorly at one point, but even then I don’t think we all realised how serious it could be. I had dips during the chemo and the proton beam therapy, but I’m now feeling so much better and my headaches have gone completely.

“I was prepared for the worst when I came to The Christie for treatment, but it was massively better than I expected. I couldn’t ask for more.”

Picture: Ryan Scutt at the end of his treatment.

Published on page 4 of the May 2021 issue of RAD Magazine.