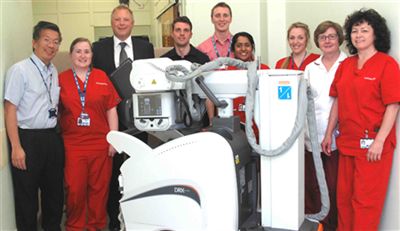 Two Carestream DRX-Revolution mobile x-ray systems have been installed in the main imaging departments at Blackpool Victoria Hospital and the Lancashire Cardiac Centre, both part of the Blackpool Teaching Hospitals NHS Trust.

Feedback received from radiographers after they had used and evaluated mobile units from different manufacturers was a major factor in the final choice of equipment.  Radiology clinical manager at Blackpool Victoria Hospital Lesley Stanney said: “We used a robust questionnaire covering different criteria which included the ergonomics of the mobile unit, image quality, wi-fi coverage and ease of use. Radiographers awarded points for each of the criteria and there was an opportunity for them to make additional comments.”

See the full report on page 3 of the September 2014 issue of RAD Magazine.