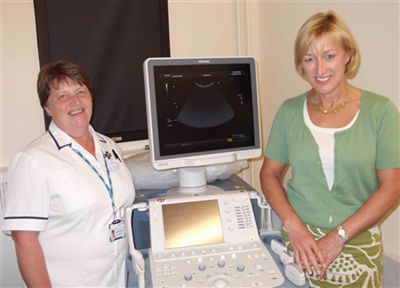 Pictured with a newly-installed Aplio XG is, on the left, senior radiographer Dorothy Williamson with consultant radiologist Dr Judy Harington.

Axminster Community Hospital in Devon has acquired a Toshiba Aplio XG Version 5 ultrasound scanner, funded by the League of Friends.

The radiology department at Axminster is supported by staff from the Royal Devon and Exeter Foundation Trust.  The Aplio XG was a popular choice, as the trust already has at least twelve ultrasound systems throughout its hospitals.

Consultant radiologist Dr Judy Harington and senior radiographer Dorothy Williamson said: “Axminster Hospital is a busy community hospital and it is thanks to funding from the League of Friends that we have been able to purchase this equipment which is greatly appreciated both by staff and patients.

“The Aplio XG is used for abdominal renal and musculoskeletal work and is an important asset in providing patients with precision imaging without the need to travel twenty-five miles to the Royal Devon and Exeter Hospital.”

See the full report on page 36 of the January 2011 issue of RAD Magazine.