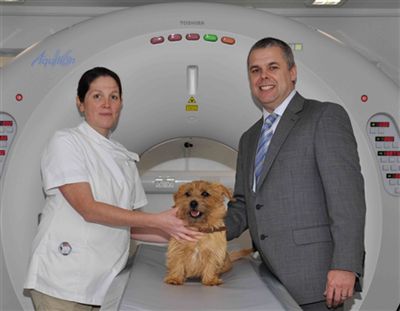 Toshiba Medical Systems has installed an Aquilion 16 CT scanner for Cambridge Radiology Referrals in the bunker’ at The Queen’s Veterinary School hospital site in Cambridge, where it predominantly scans dogs, cats and other small animals.

Cambridge Radiology Referrals was established in 1998 by Paddy Mannion to provide specialist outpatient imaging services.  She said: “We previously had a single-slice Toshiba CT scanner and had always been very pleased with the level of service supplied by Toshiba.  The changeover from our old system was seamless and we are very happy with the new scanner.

“The scans are much quicker and we are able see more detail in one process rather than having to carry out several individual tests which is obviously much better for the welfare of the animals.”