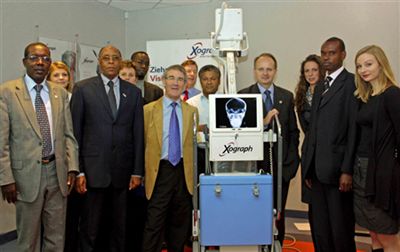 Xograph Healthcare welcomed to its head office in Tetbury, a government delegation from Rwanda’s National Commission for the fight against genocide.  It was accompanied by a team from The Inforce Foundation, a UK-based charitable organisation that carries out investigations into crimes against humanity, genocide, as well as disaster victim location and recovery worldwide.

The visitors included an MP and senior officials from Rwanda involved in the investigation of the genocide that took place 16 years ago with an estimated death toll of 800,000. The Inforce team was accompanied by representatives from Reveal Imaging, who support archaeologists, pathologists, anthropologists and other forensic scientists in their investigations all over the world.

The purpose of the visit was to demonstrate the x-ray equipment and bespoke solutions that Xograph can offer for this type of investigation.  An example was the use of Xograph’s portable dDR-GO x-ray system with built-in PACS at the Fromelles World War I graves investigation in Northern France.

Xograph md Peter Staff said: “This is a very sensitive project that requires the utmost compassion from dedicated support personnel.  We at Xograph are able to support Reveal Imaging in providing digital x-rays in this difficult working environment as they use our lightweight dDR-GO portable digital x-ray system both in Rwanda and other locations.

“We work closely with Reveal Imaging and its radiographers and this allows us to learn from their experiences.”

See this report on the back page of the February 2011 issue of RAD Magazine.

C-arms, DR detectors and mobile x-ray are among Xograph’s range