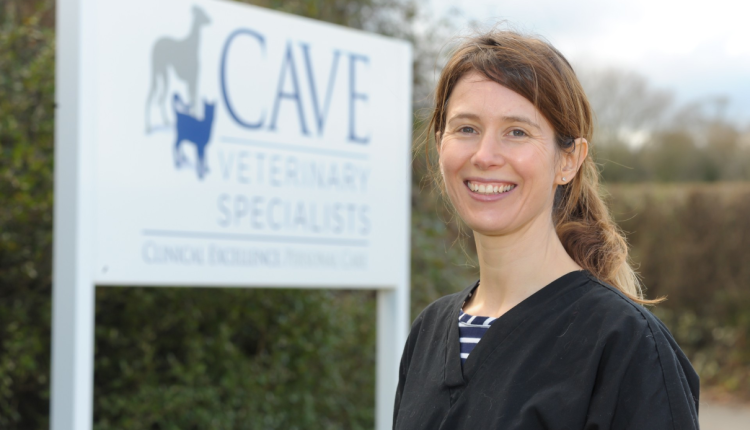 Cave Veterinary Specialists’ new diagnostic imager Lynn Matthews is studying for her second certificate in diagnostic imaging and wants to expand the imaging offered at the practice by incorporating the latest advances in the field. She hopes to collaborate with other imaging centres and is looking forward to the new MRI machine, arriving at Cave in May, which will enable utilisation of the latest advances in this technology.

I graduated from the University of Liverpool in 2003 and my first clinical role was at Wood Green Animal Shelter in Cambridgeshire. It was a great first job, because I got to work with a lot of animals and it enabled me to build up my surgery and clinical skills. I then joined Davies Veterinary Specialists as a rotating intern before starting work as an emergency vet with Vets Now, based at the PDSA.

Given the unsociable hours, I was able to save up and go travelling around the world which took me from the surfing beaches of Hawaii to the icy glaciers of New Zealand. After an action-packed trip, I was surprised to immediately fall in love on my return, with Stephen Brink, a vet from South Africa, who I met during the foot and mouth crisis. Within a year, encouraged by vets Steve knew in Hong Kong, we had filled out our paperwork, packed our backpacks and headed out there to work for three months. Little did we know we would only leave seven years later, married and with a baby!

We lived all over Hong Kong, from the centre of the country to far-flung fishing villages. I met the head of the Hong Kong Veterinary Association, Tom Mangan, who was an exceptional vet with state-of-the-art imaging equipment, and ended up working with him at his practice, Phoenix Animal Clinic. With his help and encouragement, and the best ultrasound machine money could buy, I started to develop my imaging skills. This was when I realised I could do it!

At the same time, my husband was involved in capturing wild dogs in Hong Kong to neuter, vaccinate them against rabies and release them. He achieved this with a blow pipe, as dart gun velocity was not allowed for the general public.

He would load a dart up, get as close as he could to the dogs by creeping through the dense undergrowth and trees, then blow the dart at them. They would often run off after the dart hit, so he would have to try and track them, and once found he would bring them back to the clinic. On a few occasions this involved kayaking with the sedated dog to the clinic, located in Sai Kung, which I still find quite remarkable!

Our daughter Kasia was born in 2014, six years after we moved to Hong Kong. After her birth our lifestyles completely changed and we wanted different things, so we decided to move to South Africa in 2015, where I set up a mobile imaging business in Cape Town.

I was very nervous about this decision, as it involved a large outlay to buy a machine and, despite having done lots of imaging courses in Hong Kong and having progressed enormously, like most vets, I still doubted myself. My husband gave me lots of support and encouragement and, to my surprise, my business grew, even without advertising.  It started with one practice, which used me twice in the first month. Then it was three times a month, then twice a week. It just built like that, and within a couple of years it was nine or 10 practices and I was busy every day. I got to know all of the vets in the area, and got all the gossip!

We had our son, Theo, in South Africa in 2016 and this led me to think about what our children’s future would be like there. I thought they would probably want go to Europe eventually and I would be left there.  I was also starting to feel the pull of home! I enjoyed my time there but worked on my husband to come back to England.

After arriving, we stayed with my sister in Warrington for six months and both did locum work. We thought about where we wanted to be and what we wanted to do and that ended up taking us to Hertford. I had wanted to live in the countryside and fought hard for Devon but I didn’t win!

My husband had a close friend in Hertford who had sold his practice and floated the idea of opening another practice with him. In the meantime, I found a job at Forest Vets, which was a lovely practice with MRI, CT and ultrasound facilities. I also set up my mobile business in the area and started offering scans for other practices.

My husband’s friend decided to go down a different route and as we’d moved to Hertford primarily for the practice, I decided this was the time to get what I wanted! I persuaded him to move to Devon and see how it worked, and we have been so happy since we moved here.

I was really worried about moving the kids to another school but they have settled in so well. We’ve been living with one of my best friends, Rachel Barradale, while looking for a home. There have been nine of us in one house for the past six months – five kids and four adults. This has been very sociable and busy, in stark contrast to the last two years of COVID-19 restrictions! But we’ve finally found our new home in Christow, a small village on the edge of Dartmoor National Park.

Initially when I was looking for work in the area – I had interviews and offers but they just didn’t feel right. I’d just finished my cardiology certificate and saw that Cave Veterinary Specialists, which is part of Linnaeus, was looking for a diagnostic imager.  I contacted them directly, went to visit, and it’s gone from there. It’s a fantastic team, a very supportive environment and my dream job!

The plan is for me to be involved in the running of the CT scanner and new MRI when it arrives later this year; in addition to performing ultrasounds, aspirates and trucut biopsies. It is great to work with all these modalities as they all have their unique advantages and benefits, which complement each other.

I’m currently studying for a second certificate in imaging which should be finished by the end of the year, with plans for a CT interpretation certificate after this. I would love to eventually sit the specialist exams but it can be quite difficult when you are a bit older with a family. Currently the routes to specialisation are very narrow and opportunities few.  So, I plan to work hard, learn and get there in my own way!