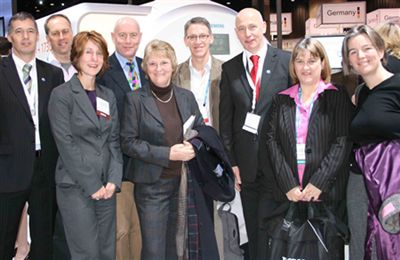 The 95th Scientific Assembly and Annual Meeting of the Radiological Society of North America (RSNA) opened earlier this week in Chicago and continues until Friday, December 4, 2009.

Over 700 attendees from the UK and Ireland made the trip to Chicago for the meeting, which this year featured a special session in conjunction with the Royal College of Radiologists  The UK Presents.  The session featured the latest in radiology research from the UK and included papers on emergency radiology, high-resolution CT of the lung and MR fluoroscopy.

The technical exhibition attracted over 700 exhibitors.  Attendees from Poole made an early visit to the Siemens stand on Monday to view the Magnetom Skyra MR scanner.  Pictured from left are Peter Harrison and Jane Kilkenny from Siemens, Jonathon Jones, Michael Creagh-Barry, Marian Hallett, (all from Poole), Siemens’ David Wilkins and Christine Woodgate and Catherine LeeElliott from Poole.

Picture reports from RSNA will be published in the December and January issue of RAD Magazine.