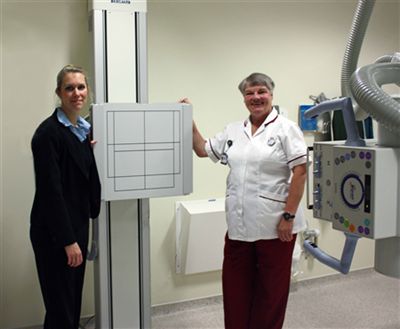 Frome Community Hospital in Somerset opened its doors to its first patients in June 2008. The x-ray department has now installed a buckyStar general imaging system from Xograph Healthcare.

The local hospital, despite having a small x-ray department, decided to go direct digital (dDR) because they wanted a quicker flash reporting system.  Images can now be sent direct to the nearest main hospital for immediate reporting.  This provides great benefits to the local community as patients do not have to travel to their city hospital; they can now be treated locally.

The department treats a large percentage of elderly patients, many of whom, have arthritic pain, particularly in the hip or spine.  For this reason, 80% of the workload is carried out on the buckyStar upright wall stand. Arthritic patients do not need to struggle onto the bed putting pressure on their joints.  It is also faster for radiographers, not only because it provides images within seconds but also because patient positioning is that much easier.

C-arms, DR detectors and mobile x-ray are among Xograph’s range