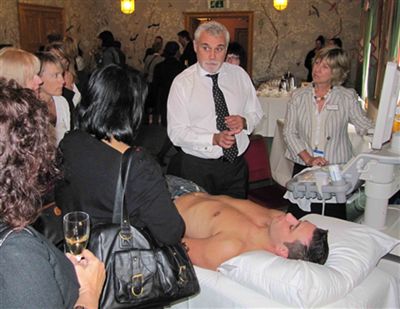 Toshiba Medical Systems launched its new Aplio family of ultrasound systems at the BMUS meeting in Brighton.  The Aplio 300, 400 and 500 offer an extensive range of clinical innovations presented in a fresh, smart and ergonomic design, says Toshiba.

The equipment was showcased on the Toshiba stand where live scanning was performed by leading ultrasound experts and academics.  At a VIP customer event at the Royal Pavilion, workshops and living scanning sessions were conducted and attendees were served high tea with champagne.

Among those demonstrating the equipment was consultant clinical scientist Professor Neil Pugh from University Hospital of Wales who showed FlyThru technology in vascular ultrasound.

See the full report on page 6 of the December 2011 issue of RAD Magazine.