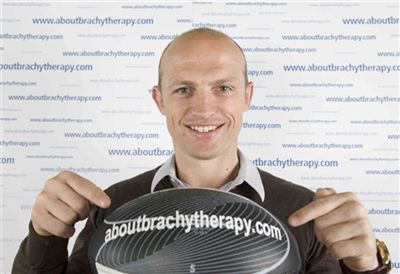 Rugby star Matt Dawson launches a campaign to drive awareness of brachytherapy, dubbed The best kept secret in cancer treatment’ as it is little known by sufferers from cancer.

Former England Rugby World Cup winner Matt Dawson has launched a campaign to raise awareness about brachytherapy.  The campaign and www.aboutbrachytherapy.com website are supported by Nucletron.

“Having had close family members suffer from cancer, having access to information and learning about our options was a crucial step to helping us deal with the situation,” said Matt Dawson.

According to a survey, 75 per cent of patients with cancer have never heard of brachytherapy and of the 25 per cent who are aware, only one in four have been offered the treatment.

Professor Peter Hoskins, consultant clinical oncologist from Mount Vernon Hospital, said: “Brachytherapy is little known among cancer patients; many people don’t have to stay in hospital when they receive the treatment or, if they do, the time is much less than other options such as surgery.”

Brachytherapy is a well-tolerated technique that brings the radiation dose directly to the target area.

Nucletron has been a world leader in brachytherapy for 25 years.  One of its latest products is Oncentra Brachy, a volume-based treatment planning solution.  As a fully Dicom-compatible system, it features optimisation algorithms to shorten time spent planning.  Among its features are 3D contouring and margining tools to identify Regions of Interests (ROIs) on CT or in multi-modality imaging environments using image registration for CT, MR and PET data.

See this report on page 3 of the May 2010 issue of RAD Magazine.