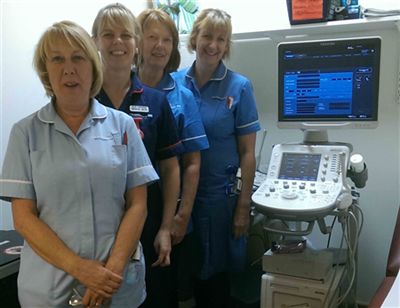 Great Western Hospital’s day assessment unit has purchased a Toshiba Xario 200 ultrasound system to replace an older Toshiba scanner.  The Xario 200 is a versatile general purpose routine system that can handle high performance studies.  It is customised for the unit at the Swindon hospital to facilitate swift assessment of fetal growth and well-being.

The handover of the system coincided with the 20th anniversary celebrations of the opening of the unit in the antenatal department.

Midwifery sister Julie Edwards says: “We were always very satisfied with our previous Toshiba systems and also with the support we receive from Toshiba staff.  We are very happy with our new system; it is lighter, very portable and also state-of-the-art.  We are able to work more efficiently and, as usual, the support has been excellent.”

See the full report on page 8 of the April 2015 issue of RAD Magazine.

Who cares for ultrasound? Mi Healthcare does!