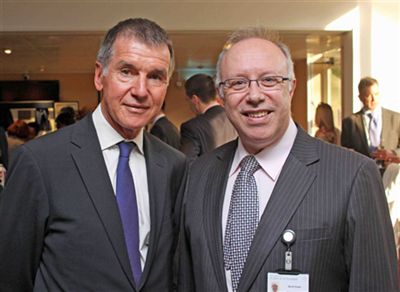 Professor Alan McGregor and medical director Dr David Grant from the Hospital of St John and St Elizabeth have officially unveiled the installation of a Magnetom Skyra 3 Tesla MRI system from Siemens Healthcare.

A Magnetom Skyra 3 Tesla MRI system from Siemens Healthcare installed in the imaging department of the Hospital of St John and St Elizabeth was officially unveiled by medical director Dr David Grant and Professor Alan McGregor.

The facility is dedicated to the memory of radiologist Ginny McGregor, a visionary of 3T MRI who worked at the hospital until she died of cancer in 2007, aged 44.

One of the UK’s largest independent charity hospitals, the Hospital of St John and St Elizabeth is said to be the first private hospital in London with a Skyra MRI and one of the first using 3T in private practice.  It will be used for musculoskeletal examinations including the treatment of professional UK athletes and other sporting stars.

See the full report on page 37 of the September 2011 issue of RAD Magazine.