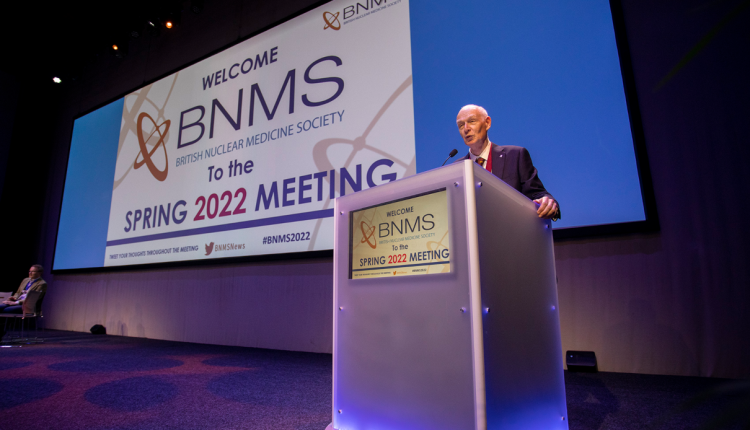 After a three-year hiatus, the British Nuclear Medicine Society Spring Meeting returned to a face-to-face format at the SEC in Glasgow on May 16-18.

This year’s event was one of the best attended meetings in the last 10 years, with approximately 500 delegates and 26 industry partners participating. In addition, approximately 70 invited speakers were in attendance, the majority of whom presented in person. Due to the global variations in COVID-19 travel restrictions, there was also a hybrid element to the meeting, with a few overseas plenary speakers delivering their pre-recorded talks but appearing live virtually for the audience Q&A sessions.

This year’s themes were based around the topics of accreditation, external inspection, quantification in nuclear medicine, theragnostics and education, with dedicated radiographer, technologist and nurse sessions. Sessions were well received by the audience who enthusiastically contributed to a successful meeting.

Industry played an important role in the success of the meeting, offering sponsorship and hosting symposia, for which the BNMS is grateful. Industry representatives were particularly delighted with the return to the face-to-face format as this made for better interaction with delegates than the virtual format.

There were many highlights in the programme. For the first time, the president of The Royal College of Radiologists was in attendance. Dr Jeanette Dickson, an alumni of Glasgow University, gave a timely talk on the future of radionuclide therapy in the UK. The annual lecture was passionately delivered by Professor Val Lewington, who took us on a reflective journey on nuclear medicine therapy expansion in the UK. Among the overseas speakers, Dr Aravind Ravi Kumar and Professor Jason Lewis gave standout presentations on theranostics for cancer imaging and therapy. Professor Phil Blower and Dr Charlotte Fowler gave an expertly curated lecture selecting highlights of the scientific and educational content of the meeting.

There were numerous enthusiastically attended social events too. The BNMS president’s reception was graciously hosted by Glasgow City Council, which was represented by the charismatic vice dean Andrew McFarlane. Meanwhile, a 5k fun run was expertly timed with the sunshine and won by Nick Stevens.

The oversubscribed formal dinner took place at the futuristic dome of the Glasgow Science Centre, where numerous awards were given – some that had been postponed due to COVID-19 were particularly well received.

All in all, judging by the smiles on the faces of delegates and industry partners, the next conference in Liverpool 2023 cannot come soon enough.

Lead picture: Vice dean of the Guild of The Merchants House of Glasgow Andrew McFarlane officially opened the conference.

See the RAD Magazine photo report here and on pages 6-7 of the June 2022 issue of RAD Magazine.

See this report on page 4 of the June 2022 issue of RAD Magazine.