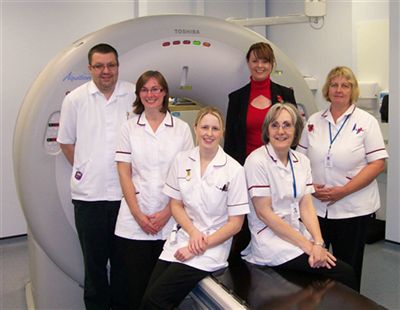 The Royal Shrewsbury Hospital has installed a Toshiba Aquilion LB CT scanner for use primarily in its radiotherapy department.

Radiotherapy manager Margaret van Daesdonk said: “During the procurement period we saw several scanners and narrowed our choice down to two systems.  One of the most important reasons for Toshiba eventually being chosen was because we liked the company’s approach to life-long learning and on-going support.  The excellent image quality and ease-of-use of the system also played a part in our decision as well as the system’s large bore.”

The hospital is part of the Shrewsbury and Telford Hospital Trust, which includes The Princess Royal Hospital in Telford.  The trust, which is the main provider of acute hospital care for almost 500,000 people from Shropshire, Telford and Wrekin and mid-Wales, achieved teaching hospital status through its partnership with the Keele University School of Medicine.  The Royal Shrewsbury underwent a major transformation of its facilities with a state-of-the art £25 million Treatment Centre opened in early 2005.

See the full report on page 12 of the January 2011 issue of RAD Magazine.