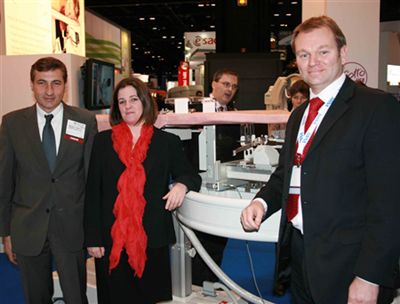 Pictured on the Giotto stand at RSNA are from left Giotto’s Mairo Tonoto with Clare Kavalieris and Trevor Nicholls from Southern Scientific, Giotto’s distributor in the UK.

The 96th Annual Meeting of the Radiological Society of North America, which opened on Sunday, November 28, in Chicago draws to a close today.

Earlier in the week former US president Bill Clinton made a special address to the meeting emphasising the urgent need to raise global awareness about cancernow the number one killer worldwideparticularly in developing countries that are less prepared to deal with the disease.

Yesterday Burton P Drayer, MD, was inaugurated as the new president of RSNA.  Dr Drayer is executive vice-president for risk at The Mount Sinai Medical Center in New York City, and since 1995, has served as the Dr Charles M. and Marilyn Newman Professor and chair of the Department

of Radiology at The Mount Sinai School of Medicine.

Early, unaudited, figures indicated a 2% increase on attendance over last year with more than 600 exhibitors taking part in the technical exhibition.

Photo-reports of RSNA will be published in the December 2010 and January 2011 issues of RAD Magazine.