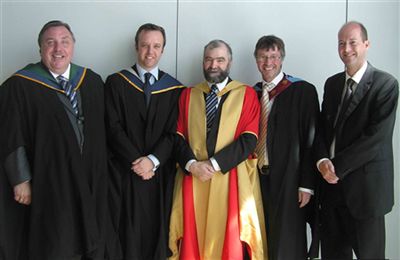 The Society and College of Radiographers’ Silver Medal has been conferred on Professor Richard Lawson.  The Silver Medal is awarded to individuals who have made an outstanding contribution to the science and practice of radiography, and, on July 14th,  immediately after the PGD Nuclear Medicine Graduation ceremony  Professor Richard Lawson was presented with a Silver Medal. The presentation was opened by comments from chancellor of the University of Salford Professor Sir Martin Harris.

Former PGD Nuclear Medicine student Mr Mike Rowley offered some words about Richard on behalf of his peer group and himself and then former president of SCoR Andy Pitt read a citation and presented Professor Richard Lawson with the award.

He has been influential in the world of nuclear medicine, and has brought his expertise and enthusiasm to bear, particularly in the education and professional development of radiographers and nuclear medicine technologists.

See the full report on page 2 of the August 2009 issue of RAD Magazine.