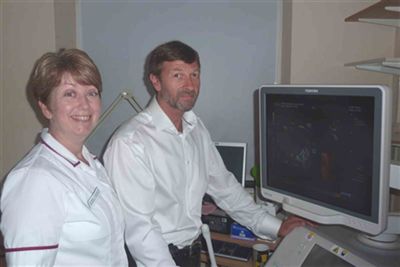 East Surrey Hospital at Redhill and Crawley Hospital have each acquired two Toshiba Aplio MX systems; those at East Surrey will be used in the obstetrics department and at Crawley they are for use in the maternity department.  Both hospitals are part of the Surrey and Sussex Healthcare NHS Trust.

The Aplio MX is Toshiba’s latest addition to its Aplio range, sharing its core imaging architecture as well as its transducers with the Aplio XG.

It features advanced imaging functions to provide image clarity.  The system is lightweight and its fully programmable user interface, as well as its adjustable main panel and 19″ monitor with articulating arm, allows sonographers to configure their work according to clinical needs and preferences.

Toshiba ultrasound general manager Stuart Mills said: “We are delighted that both Crawley Hospital and Easy Surrey chose the Aplio MX.  Both hospitals are very close to our head office at Crawley and it’s good to do business with local institutions.”

See this report on page 29 of the October 2010 issue of RAD Magazine.