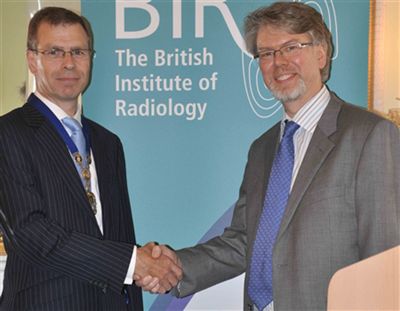 Dr Stephen Davies became The British Institute of Radiology’s 79th President in a ceremony held in Chandos House, London.  Dr Davies is a consultant radiologist at Cwm Taf Health Board in South Wales.

Dr Davies joined the institute in 1989 and was soon involved in the modernisation of the BIR’s membership scheme by contributing a trainee’s perspective.  He continued his commitment by participating in the BIR Teleradiology Working Party and then by joining the Welsh Branch of the BIR.

In 2003 Dr Davies became the first chair of the BIR Integrating the Healthcare Enterprise Scientific Committee.  He became a council member in 2006 and served as vice president for two years before his inauguration as president for 2010-12.

During his inauguration ceremony, Dr Davies acknowledged the achievements of his predecessor, Dr Stuart Green, saying: “Through his leadership the BIR has successfully come through a challenging phase in its history.  His careful judgement and inclusive leadership have served the BIR well.”

Looking to the future, Dr Davies announced: “We will explore new and refresh established strategic alliances in order to deliver our mission.  We will ensure that our charitable public benefit is relevant to 2011 onwards.  We will need to adapt to the changing world of the UK NHS, which will challenge the ability of many of our members to find time to carry out their good works for the Institute.”

See the report on page 3 of the November 2010 issue of RAD Magazine.