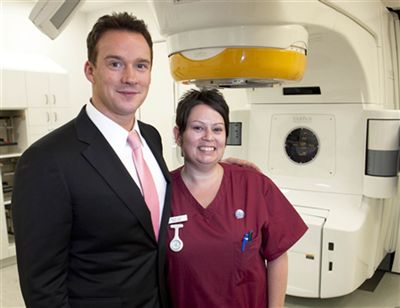 The Salford-born singer was given radiotherapy at The Christie in 2008 after being diagnosed with a brain tumour.

He was shown around the new centre before meeting cancer patients from Salford and said: “The treatment I received at The Christie in Withington was first rate, but there is no denying that 25 days of radiotherapy were made all the more gruelling because of the one hour daily round trip from my home in Cheshire.

“This place is so central to lots of towns and people will be able to access treatment on their own doorstep.  And better still, the equipment and the staff here are world-class, the very latest in radiotherapy.”

Lead radiographer Rachel Good said: “We were honoured to show Russell Watson around our new centre.”

See the full report on page 2 of the August 2011 issue of RAD Magazine.