Dogs brains process what we say and how we say it 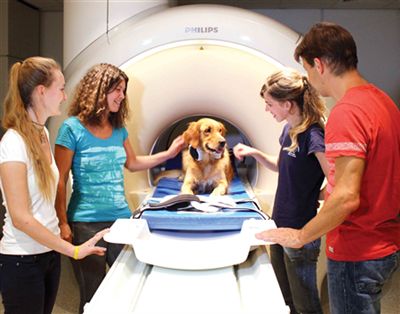 An fMRI study to investigate how dog brains process speech shows that they care about what we say and how we say it.  Dogs, like people, use the left hemisphere to process words and a right hemisphere region to process intonation, according to a study published in Science.

Findings suggest that the neural mechanisms to process words evolved much earlier than previously thought, and are not unique to the human brain.  It shows that if an environment is rich in speech, as is the case with family dogs, word meaning representations can arise in the brain, even in a non-primate mammal that is not able to speak.

“During speech processing, there is a well-known distribution of labour in the human brain,” explained lead researcher Atilla Andics from the department of ethology and MTA-ELTE Comparative Ethology Research Group at Eötvös Loránd University, Budapest. “It is mainly the left hemisphere’s job to process word meaning, and the right hemisphere’s job to process intonation. But the human brain not only separately analyses what we say and how we say it, but also integrates the two types of information, to arrive at a unified meaning. Our findings suggest that dogs can also do all that, and that they use very similar brain mechanisms.”

See the full report on page 15 of the October 2016 issue of RAD Magazine.