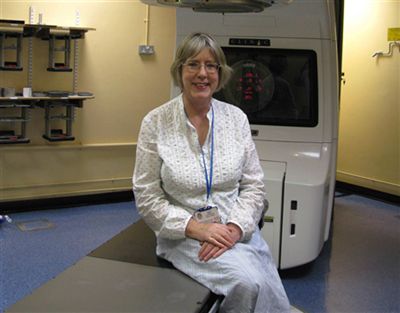 Pauline Batten pictured with a linear accelerator at Essex County Hospital in Colchester.

One of the longest-serving NHS employees in the UK has finally retired  but plans to return to her department to work as a volunteer.

Pauline Batten, who is 67, has spent her entire 48-year NHS career  including the past 31 years at Essex County Hospital, Colchester  working in radiotherapy.

Even after nearly half a century, she has often worked extra hours for no additional reward, and is looking forward to returning to the radiotherapy department in mid-September as a volunteer to do administrative work one day a week.

“There have been many changes since I started out as a student radiographer in 1962 but what hasn’t changed is the esprit de corps among the radiographers and the high level of job satisfaction,” she said.

Mrs Batten, who spent the first three years of her life in Edinburgh, trained in Oxford and then worked as a radiographer at hospitals in London, Wolverhampton and Southend.

Mrs Batten started at Essex County Hospital  which now has 32 radiographers  in 1979 and has remained there ever since.  She also works one morning a week at Broomfield Hospital in Chelmsford.

See the full report on page 13 of the September 2010 issue of RAD Magazine.