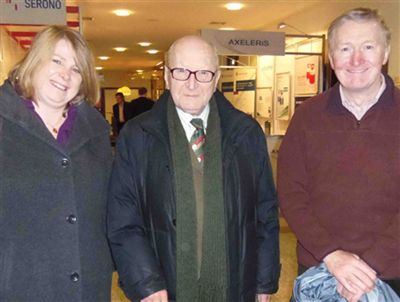 Linda Hacking from Blackpool, Professor Rudolf Hofer from Vienna and Bill Thompson from Birmingham arrive for the opening ceremony of January’s symposium at Bad Hofgastein.

This year was the 30th anniversary of an uninterrupted series of biannual meetings at Bad Gastein and Bad Hofgastein in Austria, looking at radioactivity in the clinic and in research.  Originating from an idea from Professors Hofer, Vetter and Fellinger from the Second Medical Clinic of the University of Vienna, the Radioactive Isotopes in Clinical Medicine and Research meeting was held in a ski resort with lectures early in the morning and late at night, the break allowing skiing in the middle of the day.

In recognition of the 30th anniversary, medals were presented to those with a long attendance record.  Gold medals were awarded to Ralph McCready, who first attended in 1966, and Andrew Todd-Pokropek in 1972.  Speakers from the UK included Todd-Pokpropek from London, Bill Thompson from Birmingham and McCready from Brighton.

Discussions are ongoing about the venue of the next meeting as the current organisers are retiring.

See the full report on page 29 of the March 2012 issue of RAD Magazine.