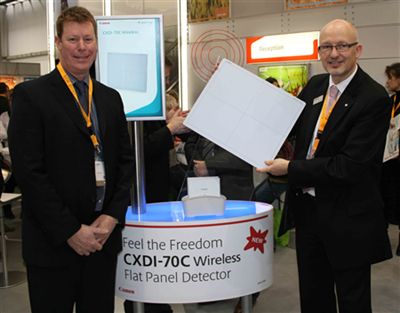 The 22nd European Congress of Radiology held in Vienna from March 4-8, attracted delegates from around the world.

The CXDI-70C wireless detector eliminates the need for a cable for improved operability whilst delivering greatly enhanced image quality with a reduced radiation burden for the patient.

The newly developed Canon CXDI-70C Wireless has the same external dimensions as current ISO4090 compliant imaging cassettes allowing use in existing rooms without the need to modify analogue imaging equipment. The wireless detector incorporates a new Canon-developed glass substrate with a pixel pitch of 125 microns and delivers an increased level of sensitivity as a result of its Caesium Iodide (CsI) scintillator and new Canon detector developments. This combination delivers exceptional image quality whilst significantly reducing X-ray exposure to the patient.

A picture report of ECR will be published in the April issue of RAD Magazine.