A better image for Glastonbury revellers 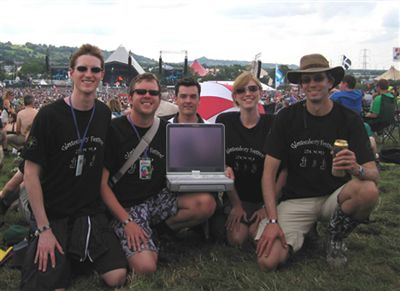 At this year’s Glastonbury event, Festival Medical Services (FMS) expanded to provide a 24-hour on-call ultrasound service, with support from Toshiba Medical Systems.  The service was staffed by six radiologists of different specialities using the new pre-released version of Toshiba’s Viamo portable ultrasound system.  The system’s array of probes offers the potential for a wide range of examinations including abdominal, gynaecological, musculoskeletal and cardiac imaging.   In addition to the radiology team, applications support from Toshiba was on hand to help maximise the Viamo’s features.

Each year approximately 200,000 music lovers attend the annual festival in Somerset; however, few people are aware of the logistical challenges of supplying high quality health care provision to a population equivalent to that of a city such as Norwich or Newcastle.

For the last 25 years, FMS has provided a team of doctors and nurses to look after this transient crowd of festival goers.  The service supplies 600 staff and sees close to 4,000 patients over the six-day period  almost double the figures for most emergency departments in the UK.  Patients suffer a variety of mishaps from trivial insect bites and sprains through to potentially life-threatening conditions.  This year there were three cases of Swine Flu, two Glastonbury babies and one death.

See the full report on page 10 of the September 2009 issue of RAD Magazine.