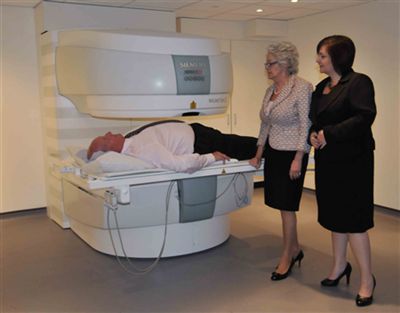 A patient whose life was saved after being one of the first to undergo an open MRI scan at Spire Windsor Clinic, was invited to officially open the new clinic.

Mr Julian Hurcombe-Blight explained: “After being told stories about the tunnel’ MRI scanners, I was relieved to find out that I could have an open MRI just down the road at the brand new Spire Windsor Clinic. I was originally referred for a spinal scan, but my brain was also scanned which revealed a brain haemorrhage that required immediate surgery.”

The Magnetom C! open MRI scanner from Siemens Healthcare is one of a host of diagnostic facilities available at the clinic. Patients have access to seven consulting rooms, a minor treatment room as well as the latest diagnostic facilities. Consultants cover the specialities of orthopaedics, urology, cosmetic surgery and general surgery.

See the full report on page 30 of the July 2010 issue of RAD Magazine.