Getting set for a November opening 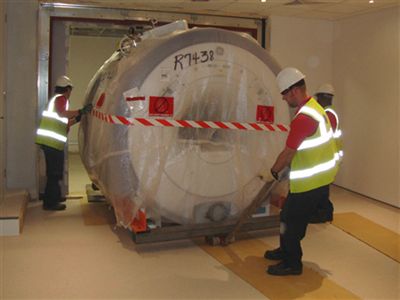 A GE Signa HDxt 1.5T MRI scanner is delivered to the hospital.

Asteral reports a key milestone working with Peterborough City Hospital as part of its managed equipment services contract at the Trust.

The new £335 million City Hospital is now ramping up to go live in November and Asteral has already installed a set of new x-ray machines in the emergency centre.

Equipment includes three Philips BuckyDiagnost ceiling suspension systems, which are the first of many fixed items of equipment that will be installed prior to the opening of the hospital.

In addition, Asteral has taken delivery of the first MRI scanner  a GE Signa HDxt 1.5T. Weighing 6 tonnes, it took several hours to be moved into position ahead of a further installation due shortly of an even larger 11.5 tonne GE Signa HDxt 3.0T.

The Asteral team is also busy installing a range of Toshiba diagnostic equipment.

Associate director of projects Angela Broekhuizen said: “We are now just a few months away from welcoming our first patient into our new hospital so every day we are one step closer to making that transition from bricks and mortar to creating a truly wonderful hospital.”

See this report on page 8 of the July 2010 issue of RAD Magazine.